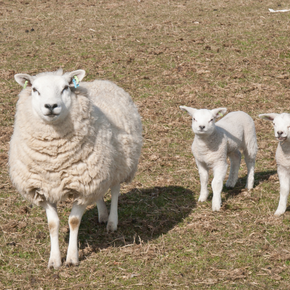 Worming (or not!) ewes at lambing

Traditionally, most flocks have wormed ewes at lambing. This practice is designed to combat the drop in immunity to worms that ewes experience from around 2 weeks before lambing to 6 weeks afterwards. By worming during this time, when ewes may be shedding more eggs onto pasture, we were aiming to reduce the levels of pasture contamination for new, susceptible lambs.

Only target thin or immature ewes for worming

HOWEVER! Recent studies have shown that this practice has limited effect on egg output onto pasture in adult ewes, especially those in good body condition score. It is therefore recommended that worming treatments are targeted only to thinner ewes or immature ewes (ewe lambs and shearlings). Previous advice was that 10-20% of ewes should be left untreated around lambing. While this is still a good target for a number of flocks, within the practice we are aware of a number of flocks now only treating a small number of ewes and some none at all! As treatment is targeted around body condition score, good grazing and nutritional management is key to reducing the need to worm.

When leaving a number of ewes untreated, make sure these are spread throughout grazing groups to reduce the selection for resistance. Selection for resistance will be increased if, for example, all single bearing ewes are left untreated but then all graze together in one group. Faecal egg counts can be used to assess the need to treat in flocks and these should be carried out very close to lambing or just after ewes have lambed to ensure we are testing during the drop in immunity.

Cydectin products should be avoided for ewes at lambing. Due to the persistent nature of these products, they are highly selective for resistance. If being used, they should never be used in repeated years for ewes at lambing, nor used again that year in any sheep on the farm. If they are used for worming then 10-20% ewes must be left untreated to reduce the selection for resistance and if sheep scab treatment is required later in the year, then dipping should be used rather than repeat use of Cydectin.